You may have seen the series in the New York Times a few years back that chronicled a year in the life of six people over the age of 85.  Each person was different, and living in widely varying circumstances; the common thread was their residence in New York, and their status as members of the fastest growing age demographic in the country. 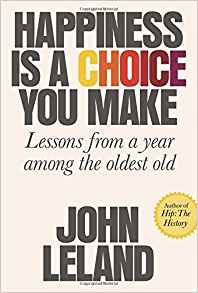 Reporter John Leland found he didn’t want the interaction to stop when the year was up.  In tandem, he was grappling with the decline of his own mother, and he found what he learned from the subjects of his story was strengthening his relationship with her.  Too, he was in personal transition, and observing an older couple finding new love, as well as others experiencing loss, nourished him.

So, he turned the material into a book.  It’s called Happiness is a Choice You Make: Lessons from a Year Among the Oldest Old.  This isn’t a feel-good happy look that glosses over the realities of aging. Loss, loneliness, and chronic pain are prominent parts of the story, but Leland’s compassion and skill  make these portraits so rich and compelling.